A listener of my Podcast turned me onto a site called FanCharm.com, which is a new startup venture targeting OnlyFans creators. What they offer to do is to provide a series of auto posting and auto messaging services for creators on the web site. Reddit. Anyone who has been on Reddit for more than a few days can tell you the site has a long learning curve. From understanding moderators, to independent subreddit rules, to the unspoken language of redditquette it can be a tricky site to navigate. So it makes sense that someone who see this opportunity and try to cash in and capitalize on it. I immediately reached out to the owner of this site via the chat box on their site to see if we might be able to work together. My initial impression of the site was that it was similar to Redditforlater and was attempting to make posting a little easier on creators. When I reached out to him I let him know that I was looking to provide any good services to my clients and that if he had a solution for Reddit I was interested. He said that he would review my Podcast and get back to me. I went back onto the website a few more times and reached out but did not hear back. I decided I would then look a little deeper into the site and what exactly they were offering. It then became clear to me that this might not be the safe service that it claims to be.

Is it Safe for OnlyFans Creators?

They have a discord server setup and I have to admire their ability to have someone on this constantly. If anyone jumps on the server they have someone there to answer their questions. As I am sure you know the OnlyFans community is huge and any service you end up providing is going to get some interest. They offer a free trial package and then a package for $19 a month as well. So many creators have jumped on and tried their trial package.

One of the first things I noticed on the site was a claim I couldn’t get fully behind. The claim was that OAuth access like Facebook and Google was generally the same as what they were describing on the site. It is true that sites like Facebook and Google allow you to sign up to a site via your already established accounts with them. This is done because they are very trusted sites and people want to login to a site as quickly as possible to get started. The owners of these sites make that possible so that people don’t have to go through the long process of signing up. This also helps the site because many people will sign up with fake email information so the site is more likely to get a real authentic person if they are using their Facebook or Google Account. This is in no way similar to what Fancharm is asking creators to do on their site. A Reddit user would basically be giving Fancharm full permission to use their account in just about every way but to change the password to lock you out. This account can DM people, post on your account for you, add or follow people and subreddits and you give them all this permission by singing up. This does not happen when you do the same thing with Google or Facebook. Equating the two made me suspicious as did the services that they end up providing to OnlyFans creators. They are automating a process that requires a human touch The fact is that Reddt itself is not a self promotion platform and highly discourages it. 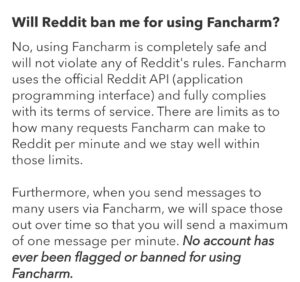 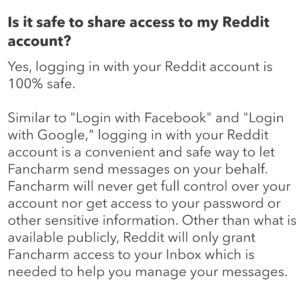 The site says that no one will get banned for using Fancharm but that is not how Reddit works. You can get banned from the subreddits where you need to post. Reddit also imposes penalties on your account when they find you are doing automated activity. They also like to ‘throttle’ an account, which basically means that inside you account it will show that DMs went out or posts went out but the people on the the other end Never got them. When you look at your report or account from FanCharm or other providers it will show that DMs went out but did they really? If you are sending too much information from your account Reddit will notice and will throttle your activity. I also wanted to know what the subreddit issues might be as well to auto posting.

I reached out to several of the top NSFW Reddit accounts and specifically to their moderators to ask what their opinion of such activities were. I wrote 5 communities and got a response from everyone within 3 hours. These communities have dedicated moderators who work hard and they do not want their subreddits taken over by bots. Here was what I wrote to each and their responses.

I host a popular Podcast about OnlyFans and I investigate services offered to them. I was recently made aware of a site called Fancharm.com which is attempting to auto post in subreddits/ auto DMs etc. for onlyfans creators. The site states it can’t get you banned from reddit or subreddits but I am highly suspicious. If any of the mods on this subreddit could comment about the issues that could arise from using a service like this (which to me is not in the spirit of reddit/anti-promotion or community nature) I’d greatly appreciate it. Thank you. 🙂

We don’t allow any for-profit accounts on /r/gonewild.

No self-promotion or attempts to make a profit anywhere. If you sell panties, fetish items, cam shows, suggest payment (Onlyfans, PayPal, Cash App, etc.), request gifts/have a wishlist or anything similar ANYWHERE on Reddit (this includes your profile page), and wish to post to Gonewild, please do so under a separate account. We wish to remain separated from all money-making endeavors, so that Gonewild remains a purely exhibitionists’ subreddit where people post for absolutely no other reason than the thrill of it.

Anyone who breaks that rule will get banned.

We have nothing against auto posting, but there are disadvantages to using posting services.

These are just a few I can think of off the top of my head. We do not allow and mention of selling in this sub at all, so its a moot point. I do however, moderate the largest OnlyFans promotion network on Reddit, so I can speak about the above reasons with experience. (r/OnlyFans101)

If it breaks any of our rules it will get removed, and potentially banned (especially for spam / promotion)

hi – any user that is caught using that type of service will be permanently banned.

no problem – happy to help. 👍 I also help mod a few of the other nsfw subs so those users will be banned in those subs as well.

Not Worth the Risk

So the top Mods on the top NSWF SubReddits either are letting you know that this practice will get you banned from the subreddits you desire to post on or that it will be generally ineffective. To me what is eve worse is that this is SPAM activity. What do all sites do when a site starts to overload them with SPAM? They ban the site and all the users involved with that site. Right now Reddit is friendly to OnlyFans creators. They are a welcoming community allowing OnlyFans specific promotions pages and allowing OnlyFans links in posts and profiles. How hard would it be for them much like TikTok and Instagram to ban those? Not hard at all. When that happens it will be sites like FanCharm that will have caused it. 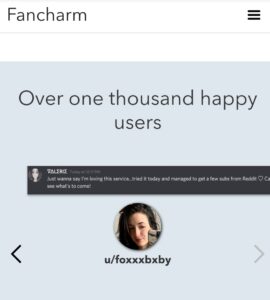 They will then send out an email letting everyone know how they can no longer provide this ‘safe’ service to clients. They now boast that they have 1,000 users already with their service. It might be tempting to jump on board with something like this but just keep in mind that you may get your Reddit page banned from subreddits and contribute to the creating a bad reputation for OnlyFans creators on a platform that has always been friendly.