I have spent quite a while avoiding the site and app ‘discord’ because frankly I have enough Social Media sites in my life and I felt that when the time came I’d jump on and figure it all out. I mean I figured what I’d find would be a more modern version of Reddit with a few tweaks here or there to embrace gamers and the Gen Z crowd. What I discovered instead was a rather ‘Wild West’ of the new Internet and I can tell you one thing, it’s not at all helpful for those creating copyrighted material as a content creator. Especially if you want to be successful as an online content creator and actually keep your content safe and protected. Are there OnlyFans creators on this platform? Absolutely there are some creators with ‘servers’ on the platform but it is so utterly ‘geek’ driven that the vast majority of those on the platform are the male demographic who primarily consume and subscribe to OnlyFans pages.

Before I dive into how bad the protection is on the site against stolen OnlyFans content I will need to describe a bit about how the site works. First for those familiar with Reddit, it’s best to picture it as if your Reddit Profile was both a profile and subreddit (community) at the same time. Then I want you to imagine that you could setup a system of reward levels based on the number of ‘invites’ you sent out (with an invite link) that would reward people usage based on their ability to bring in new people to join your server. You can already see how Discord has grown so fast into the discussion online because if you’re invited to a server and can’t message or see different things on the server and you want to, you are going to send that invite link out as much as possible so that you can gain full access to the server. Again a ‘server’ being the place where all activity can happen from sending audio, video or pictures to fellow members within the group. It gets even more complicated when you get down to how Discord makes money by selling what they call ‘Nitro” Boosts that allow for higher quality audio, more server features , even sharing custom emojis!

So you can see where the possible issue lies on Discord for copyrighted material, especially among a male demographic who is constantly searching the web sadly for “Onlyfan leaks”. This is the equivalent of ‘paydirt’ because the material can be hidden behind a number of walls most people can’t see unless they are fully qualified on the server. Within 5 minutes of signing up to Discord I did a simple search on Google for ‘Onlyfans discord’. What I was hoping to find was a few community servers that would be close in scale and purpose to OnlyFans subreddits or Only Fans Twitter Promotion pages. What I got instead was immediate access to a number of OnlyFans Servers with Only Fans leaks some behind “Invite” Level walls and others not. The first one I encountered was from a year ago and had mainly been abandoned by it’s creator but he had a lot to say. 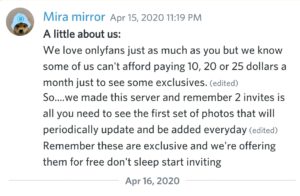 It’s always interesting to see people’s justification for creating groups like this. It’s important to note that Reddit removed all subreddits with stolen OnlyFans content so this is something that has been an issue before for sites and with enough uproar from the community the company took action. I continued and found a number of servers all dedicated to this topic. 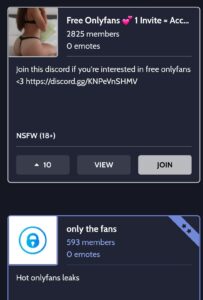 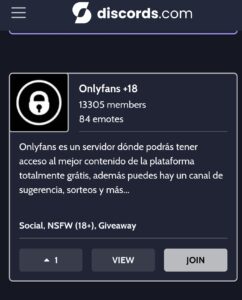 Eventually I encountered one that was full access with a staggering 13K participants and had all the material without any ‘invite’ wall at all. They even took the time to categorize the creators by name! 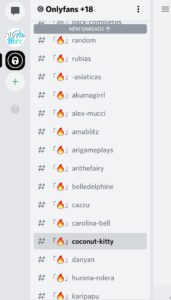 I want you to keep in mind these are the blatant servers on Discord and daily on a subreddit called r/discordnudes (NSFW warning) people list their latest OnlyFans leaked content so that there is always a new server putting these up. Although I found that many of these were ending up being scams themselves sending people to various pages and further illicit websites. What it does tell me is that the only way this kind of activity will stop is if Discord itself stops it. Discord has a fairly lenient adult material policy which as a growing company it is up to them on how they want to run their business. What they can do though is work to enforce the DMCA on their website. DMCA rules are universal and should be followed to the best of a sites ability. Discord is setting itself up to be the playground for all the bad actors who want to steal and re-distribute OnlyFans creators content.

As mentioned before as part of The Only Fans Secrets Podcast and as owner of SEO Bounty, I am committed to cleaning up bad actors and activities that are detrimental to our community and Only Fans creators. So I have setup a change.org petition to encourage Discord to work now to eliminate OnlyFans ‘watermarked’ content from their servers and to work to enforce the DMCA on their web page. As OnlyFans continues to grow a company like Discord will become the ‘go-to’ for stolen OnlyFans content and I believe we should act now as a community to stop it. Please sign the petition below at this link

With other creators and supporters of OnlyFans. I believe that together we can get Discord to commit to removing and flagging servers that share creators copyrighted materials. We will touch on this topic on Monday’s episode of the Podcast and you can read the full Petition Below. Please sign it and support creators rights!

Right now hundreds of thousands of stolen pictures and videos owned by OnlyFans creators are most likely sitting on Discord Servers. These pictures are protected by the DMCA and worldwide copyright law but Discord seems to have zero policy against the distribution of this material on their website. You can easily search Discord or Google and find thousands of OnlyFans creators picture and video content on the platform.

We want Discord to take action against the distribution of this material on their website and app. Reddit Inc. has taken similar action in banning subreddits that displayed ‘leaked’ or ‘stolen’ content from OnlyFans pages. When sites like Discord don’t take a strong stance against this kind of action it just gives people the idea that they can post this kind of content at will. There is no way that every OnlyFans creator can do a DMCA take down request against all the material on Discord. It would be impossible for them to even find all the material as much of it is hidden behind ‘server’ permission.

We are asking Discord to do the right thing and enforce a zero tolerance policy on it’s platform for stolen or leaked OnlyFans content. This will set an example, much as Reddit has that this is not acceptable.

This is mainly an issue that effects women as they are the majority of the creators on the platform and 99% of the people having ‘nudes leaked’ online. By standing against the distribution of this material on your platform you stand with Women Rights and against ‘RevengePorn’ and other forms of abuse that women suffer online.

I am Richard A. Lewis, the host of the OnlyFans Secrets Podcast, owner of Internet Marketing company, SEO Bounty and an Advocate for creators rights.  I would greatly appreciate you signing the petition as it will help keep ‘leaks’ and stolen content out of the mainstream and provide a fair wage to OnlyFans creators.